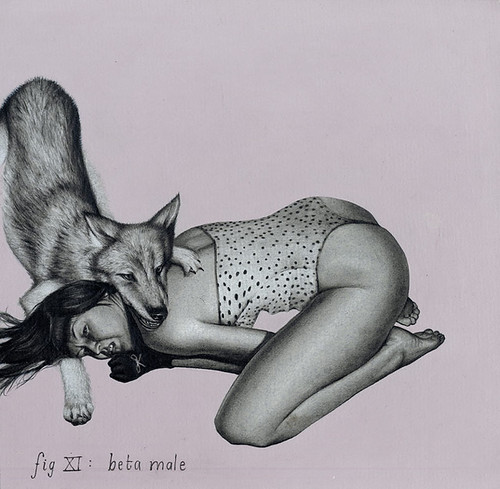 Your Flikr site is http://www.flickr.com/photos/kirstywhiten/. Everyone please take a look.


I’m immediately drawn to your Trophy work. How did that begin? It seems so biomorphic and sexual and yet very approachable to me as a viewer.

I was studying hands and fists in some detail for the altar in another drawing; “Effort and Inertia accept offerings over a blank page” (the two headed goddess), which is about the struggle to start creativity and gather momentum. It’s a bit melodramatic. The hands were all working and gripping and looked sort of sexual, so I started to sketch some active hands. I began the delicate patterning to soften the obscenity, and the work grew from there.

How long does it take you to make the renderings typically?

Some take only a few hours and some of the larger ones take days, but never more than a week for the pencil drawings, with the exception of “Hareem Scene” which is 4 x 5 ft, and took about 6 – 8 weeks. I like to work on more than one thing at once, so I can shift between them if I get frustrated. I really love the state I can get into, of deep concentration on a rendering. Time can pass very quickly if I am totally absorbed.

How does a concept for a rendering begin? Do you concepts begin by trying to complete an envisioned series or do you get the idea for a series and let the pieces have a life of their own in the series? If that makes sense?

My work has developed in sets since the beginning when I filled a sketchbook with comic-style drawings and slowly realized they were just as interesting as my oil paintings. I took the book apart and pinned them up in a block. I really like the way each image in a series plays off each other; in ‘Feral Lingerie model’, the images are like scientific observation drawings describing behaviors such as ‘competition’, ‘nursing’, and ‘display’. Then I added a few more abstract ones – ‘spider’, and ‘the cave’, which are more mysterious, and let people come to their own conclusions. They only work because the others are so straight-forward.

I keep developing an idea through a series, looking at different aspects, and then eventually I get so far from the original idea I realize I have started a new set. Like the hands I was talking about before – drawing those led on to all the ‘Trophy’ sculptures.

If I look at a series of your work they seem like each piece is filling in a narrative flip book almost? Is that correct? Does each piece add a little more to the project until at the end you have a somewhat defined narrative or do you want the viewer to have room to interpret the work?

I think if you see moments or flashes of a bigger theme, and get a sense of it that way, it’s much more powerful than telling the whole story, every detail laid out. At the same time, I want to communicate something very directly to the viewer, deliver a kick. So I guess I’m somewhere in between a defined narrative and leaving room for interpretation.

Another one of your series Hareem styles is also biomorphic in nature with the backgrounds that are in use. They remind me of the sixties psychedelic posters of past. Are you consciously aware of the potential for trippyness in your work?

It’s my psychedelic phase! That comes from the medieval Persian miniatures I was studying when i planned out this piece. I even took the colours literally from those paintings. I don’t know what those guys were on but that’s why the sky is boiling purple. Everytime I’ve created a background in a painting it has somehow had the quality of the human body, just a little – especially the forest in ‘Feral Lingerie Model – Sighting’. The trees are like veins, the hill like flanks. I didn’t plan it that way, but I have painted mostly figures for so long that’s how I think I guess.

I do see a logical progression in your work from 2000 to present. The work is graphical in nature and generally uses portraiture to tell a story. The themes have begun to grow and take on a more fully visualized nature. More robust and fully realized. Where do you see your work going in 2008? Do you have any ideas for future series?

I always want to make something more substantial, more major. I hope you’re right and that’s what’s happening slowly as I keep working…

I’m telling stories for the next series – two couples struggle with each other. In the first, a woman breaks a horse, played by a man. In the second, a horsewoman takes her man hostage. I’m trying to look at the tensions of sexuality, control and truce, the tenderness of surrender. Boy meets girl, girl ties boy to donkey…

The characters will wear costumes constructed from materials found in their own homes; weapons from the kitchen, riding gear from Adidas, hair pieces, scarves and turbans made from towels and t shirts. Adults using childlike play to act out the best and worst of their dependency and desire.

At least that’s what’s in my head. The work always changes as it comes into being.

Where will be showing this year?

I’m going to do an independent show in Edinburgh, just researching the best space to do it now.

Could you give a list of artist galleries and artists (with web site links) that you think we should be aware of?

Jessica Harrison is also from Edinburgh, also with Stolenspace, and she’s doing some great work. Lots of eye balls and tongues and beautiful rendering.
http://www.stolenspace.com/section.php?xSec=169&xPage=6
Dana Shutz is a brilliant painter
http://www.saatchi-gallery.co.uk/artists/dana_schutz.htm
as is
Inke Essenhigh – I just saw her exhibition in London and it blew me away
http://www.johncoulthart.com/feuilleton/2008/04/02/the-art-of-inke-essenhigh/