Posted by Father Mapple Moab Adzu III on Aug 1, 2010 in Laws, Philosophy, revelation, Spirituality, To Save Your Kind, Universals

My dear Globatron brethren and sistren,

I have been thinking lately about the nature of law-giving.  Anybody who has been around our temple for any time knows that this is a constant fascination for me.  I have been meditating on how it is that such things operate, like the 10 commandments, The Code of Hammurabi, or the Bill of rights…Such documents open a doorway to a new culture through the paradoxical power of prohibition.  I realized that such acts of law-giving do not find their success in their clarity and specificity, no they rely upon an innate ambiguity.  They respond to that truism that says ‘to make law is to encourage litigiousness’ by using the human tendency to resist as a means of seduction into a dialogue with morality, at times when most people are resisting exactly that.  And so, as I looked to the heavens and I asked what shall be the laws for the 21st Century, the clouds parted and and angel with 9 breasts, 3 legs and a single wing appeared to me, and said ‘Do not be horrified my silly prophet, the ways of the divine are not to be fully understood by your kind, but by those that follow you.  I shall appear to you 10 times and give you, along with the pleasure of my company, 10 laws for the 21st Century.”  After some pleasant physical contact, a thought appeared in my mind, and I knew that it issued not from my own soul, but was given to me by the angel, and she disappeared in a cloud of translucent dust, and I succumbed to a mighty sneeze.  I stood and pronounced the following commandment:

Thou Shalt Not Waste Energy! 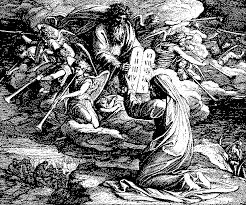